On the 5th of October, Blue Apple Hummingbird gave birth to six healthy babies, two does and four bucks!

As you know, Hummingbird is a chocolate quicksilver doe. That means she has two copies of American mink and 2 copies of British blue, as well (unfortunately!) 2 copies of chocolate. Eventually, I’ll breed the chocolate part out as it makes her just a bit too light for show standard, but as we’re a bit thin on the ground with quicksilvers here in Britain, I just bred what I had.

These babies were fathered by Blue Apple Alf-Herman, a buck who we’re not entirely sure about…that is, he may be a chocolate quicksilver agouti (so, just like Hummingbird but with a single copy of the agouti gene, which is a dominant gene) carrying a single copy of red-eyed dilute (RED). Or he may be a chocolate platinum agouti. Platinum rats have bright red eyes, as does our boy Alf-Herman.

In American mink-based rats, a single copy of RED can give the appearance of a ruby eye, though not usually quite as red eyes as Alf-Herman has. If you look at the 3 does above, you can see 3 eye colours. On the left, Hummingbird has dark ruby eyes (they are almost black now), while Little Ruth in the middle has mid-ruby eyes. Sister Freya on the right has bright red eyes (like Alf-Herman).

The question is what is changing these eye colours? Do we have the platinum gene involved or is it simply that with so many modifiers that lighten the pigment of fur, we also are seeing a lighter eye? Certainly, RED in combination with the other genes, could be responsible for a bright red eye. But we hope that the red is due to the genetics that contribute to the platinum rat, a variety that is desperate in short supply here in Britain!

Previous Story
Preparing the Birth Cage
Next Story
Have a look at the new babies! 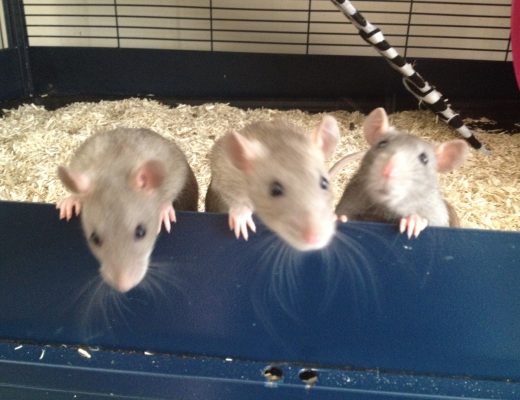 Have a look at the new babies! 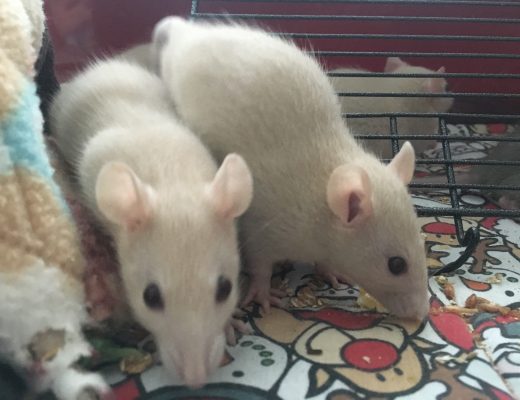 We eagerly await to see if Sweetpea, my black silver doe, is pregnant. She does look kind of chunky & we're hoping for a litter next week!

Blue Apple Rattery is located in West Berkshire between Newbury and Reading.